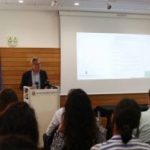 The Government of the Azores has opened a competition to support research and development projects aligned with the Intelligent Specialization (RIS3 Azores), defined for the ‘Fishery and Sea’ axis, in na overall investment of EUR 2.2 million, co-financed by the ERDF, at EUR 1.8 million, and the regional budget.

The Regional Secretary of the Sea, Science and Technology, Gui Menezes, said that the notice published on the website of the Azores Operational Program 2020 is intended for the University of the Azores, which must apply for the implementation and execution of a scientific project that includes the hiring of 10 doctorates, for a period of three years, for the Department of Oceanography and Fisheries.

According to Gui Menezes, the aim of this call is “to strengthen the basic conditions for scientific production and innovation, specifically in the priority area of Fisheries and Sea”, adding that “it is a major area within the current regional, national and international strategies, and of great impact for socio-economic development and cohesion”.

The holder of the Science portfolio in Azores also stressed “the commitment to the hiring of qualified human resources, thus promoting scientific employment and strengthening the regional scientific system, fixing researchers and contributing to their job stability”.

For the Regional Secretary, these support not only reinforce the scientific skills of the Region, but also promote “internationalization, scientific productivity, qualification and hiring of researchers, and contribute to the development of the economy of the sea” in Azores.