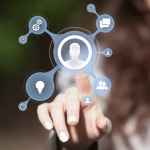 If some ORs stakeholders are connected to major players that dominate the European Research Area l, Outermost regions (ORs) s display a heterogenous state of connectivity.

Connectivity to major networks is critical for any ecosystem willing to be part of the European Research and Innovation Area. Indeed, scientific litterature has shown the critical importance of “persistant oligarchic networks” which concentrate success in the Research and Innovation (R&I) Framework Programmes (FP). At the opposite, “newcomers to European research, seeking funding without well-developed networks […] are likely to fail” (Enger, 2017).

Analyzing the integration of the ORs in the ERA, the quality of the networks developed and their capacity to be turned into FP projects thus constitutes a key lever to increase the participation.

Therefore, during Forward WP2 diagnosis, each OR was invited to scrutinize its absolute connectivity to the dominant European networks, as well as per thematic, but also to analyze the relative internationalization of its R&I system.

According to the data gathered through WP2, ORs turn out to be well connected to the most successful organizations. In Madeira and La Reunion, 3 of the 7 most frequent partners have more than 100 FP projects. In Azores, 4 of the 14 most frequent have more than 100 projects. In the Canary, 7 out of 10. As a whole, more than 50% of the most frequent partners of ORs stakeholders appear to be top FP players. However, the connectivity is heterogenous among ORs, which comprises newcomers to FP such as Mayotte and Saint Martin (Forward is indeed their first participation in FP).

The openess of regional innovation systems contributes to their efficiency through the flux of resources, people and ideas it brings to regions which are facing a global competition for talents and resources, in a knowledge econoomy marked by the coexistence of attractive hubs and lagging peripheries.

The volume of foreign phD students and post docs can be used as an indicator of such openess as well as of the capacity of the region to be identified as a valuable scientific destination.

With 44% of foreign post docs, The Canary are the most open R&I system, followed by Madeira and Martinique (25%) and the Azores (19%). Data for other regions are either not consolidated or available.

Collaboration with Third countries and among ORs

In its 2008 Communication the European Commission called for a paradigm shift that would turn ORs are “outspots of  the EU in the world”. This ambition was recalled in the 2017 communication which insisted on the necessity to facilitate exchanges and joint projects between the OR, their neighbouring countries and territories and regional organisations”.

Yet, despite the efforts to develop relationships with neighbouring countries, notably with the INTERREG programs, the OR, at the notable exception of Guadeloupe, seldom take part in FP projects which also integrate partners from their geographic basins. Moreover, most of the neighbouring countries do participate in FP without the contribution of ORs.

Finally, the majority of the FP projects implicating French OR, also integrate partner(s) from another OR, on the contrary, in the Canary and Madeira, ORs remain minior partners which represents 6 and 8.7% of the projects.

As a conclusion, the analysis of ORs connectivity shows that synergies could be found among ORs in order to learn from big players, reinforce regionalcapacities and exchange good pratices between all ORs. It also shows that European regional funds (ERDF and INTERREG V) could be more used as levers to increase networking for FP, by attracting foreign researchers and /or building future FP consortia, notably with regional partners.